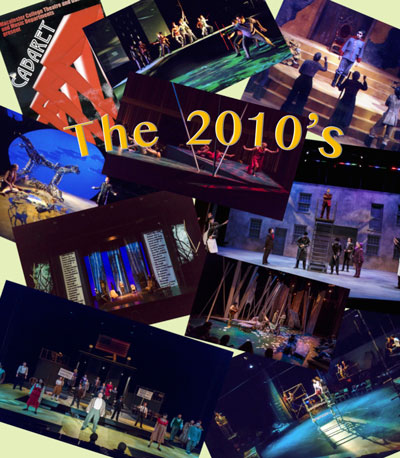 This was the last decade of the Theatre Building, built in 1964-65 and opened with the production of The Trojan Women, directed by Mary Gwen Owen. The Theatre Building was demolished at the end of the fall semester 2017 and opened for classes in January 2019.  The last thrust staging in the old theatre was Antigone directed by Randy Reyes and designed by Dan Keyser. The last production on the old theatre's Main Stage was The Cherry Orchard directed by Professor Cleary and scenery designed by Professor Keyser.

Several long-serving faculty and staff retired during this decade. In 2015 Professor Dan Keyser retired from teaching after 37 years, and he began the Theatre Archive Project. Also in 2015, Becky Heist, Head of Dance, retired after 36 years. In September 2017 Departmental Coordinator, Jeanne Arntzen, retired after 32 years of service.

In 2017 Professor Claudia Tatinge Nascimento joined the department as Chair and to teach courses in theatre history, criticism, and acting/directing. She oversaw a growing department of nine faculty members and six part-time instructors. The new Theater and Dance building opened in January 2019 with the inaugural department-wide performance in April. Entitled Letters|Home, the production was a devised dance and theater piece co-created by Professor Cláudia Tatinge Nascimento, and Professor Wynn Fricke, and the creative team of Macalester students, celebrating the various ways in which human beings relate to the notion of "home."