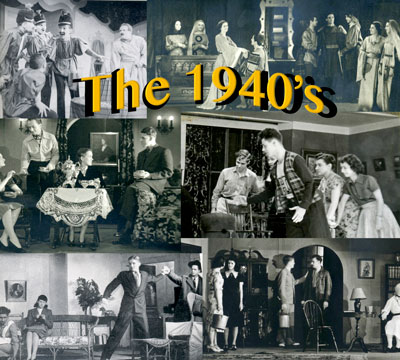 The 1940s saw many changes both at Macalester and in the world. At the start of the decade, Professor Grace Whitridge, the founding member of the Dramatic Arts and Speech Department, retired in May 1941. She had served the college for forty-one years and was awarded an Honorary Doctor’s degree in recognition of her teaching and leadership. Professor Mary Gwen Owen became the next Chair of the department and continued in that role until her retirement in 1968.

This decade saw a large growth in student enrollments, especially with returning World War II veterans attending college on the GI bill. The department continued to produce plays during the war, operating out of the Studio Theatre on the top floor of Old Main. Professor Harriet McPhetres was responsible for scenic design until 1947 when Professor Jed Davis joined the department as designer and technical director.

In 1947, with swelling post-war enrollments, the college purchased surplus Army Huts for student housing and departmental offices. One of those repurposed huts became home to the Dramatic Arts and Speech Department and its new production space, the Little Theatre. The first play produced in the Little Theatre was The Inspector General, on March 16, 1948, and the final production was The Teahouse of the August Moon, on Oct 25, 1962.  Over these same years, the Drama Choros would develop into a nationally recognized program, until it ended in 1968 with the retirement of Professor Owen.