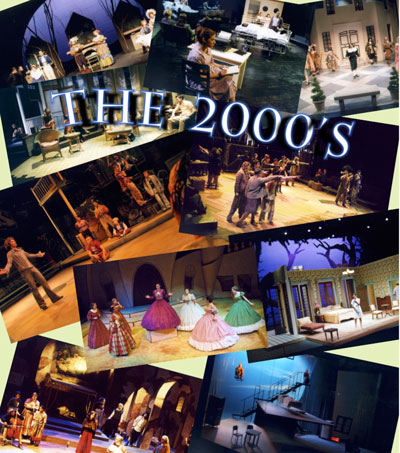 During this decade, the Dramatic Arts and Dance Department changed its name to Theatre and Dance. The department continued to grow, added new faculty, and implemented production seasons based on a theme chosen by the faculty and student members of the department. In 2002 Professor Sears Eldredge stepped down as Chair and retired from teaching. He continued to direct one production a year until 2007 when his final production was Saturday, Sunday, Monday by Eduardo De Filippo.

In 2003 Professor Beth Cleary became the Chair and oversaw the search and hiring of many new full time and part time faculty: Harry Waters, Jr. (acting and directing); Evan Winet (history and theory), who was replaced by Lara Nielsen in 2007; Judith Howard (dance and physical acting/mask work), who was replaced by Wynn Fricke (dance) and Paul Herwig (mask) in 2008; Tom Barrett (technical theatre and make-up design); and Cheryl Brinkley Moore (acting and voice for the theatre).

In 2003 the department was able to create an assistant to the Technical Director, a position filled by Rich Wilson. Rich Wilson became ill in 2010 and died in 2012. He was a much-loved member of the department, who is fondly remembered for his staging of an annual puppet show for the departmental Holiday Party, from 2003 to 2010. John Stillwell replaced Rich and served the department until 2015.