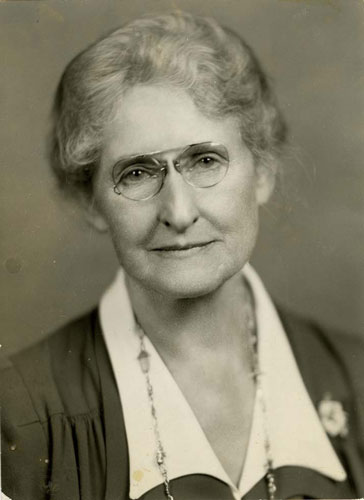 The long history of theatre and dance at Macalester College began in fall 1899 with the hiring of Grace B. Whitridge to lead the department of Oratory and Physical Training for Women.  Professor Whitridge came to Macalester after graduating from the New York Academy of Dramatic Arts and the Boston School of Oratory and Drama (later to become Emerson College). She would remain on the faculty until her retirement in 1941.

In 1900, all Macalester students were required to take Oratory and Elocution in their first and second years. Miss Whitridge was hired to further develop these one-credit courses and add other forms of oral presentation. In 1903, Professor Whitridge changed the department’s name to Dramatic Art and Expression, and began creating dedicated performance spaces on campus for the presentation of plays. The earliest of these, The Studio, was located on the third floor of the Main Building (now called "Old Main").  In 1915, the plays produced by the department became known as presentations of the Macalester Players, and the productions grew in scope and number.

During the 1920s, the department's offerings expanded with new courses in story-telling and playwrighting, and a full semester of Play Production with hands-on work in directing, costuming, make-up, lighting, and scenery design and construction. By 1926 the department was offering a major in Drama. In 1928 Mary Gwen Owen, a 1923 graduate of Macalester, joined the department as Assistant Instructor to Whitridge. In the 1930s, Professor Owen developed courses in Reader's Theatre and Radio Plays, and created the foundation of the Drama Choros, a dramatic recitation group that traveled widely.

When Grace B. Whitridge retired in 1941, she had led the department for forty-one years, directed more than 100 plays, and established programs that have continued through the decades. In 1916, she began the Christmas Eve Pageant at House of Hope Presbyterian Church, a dramatic tableaux still presented today.  In 1926, Professor Whitridge created a college-wide event that became known as the Candle Light Service and continued into the 1960s. In 1938, the first Founder’s Day celebration was established by Professor Whitridge in honor of President James Wallace’s 89th Birthday. It still exists today. In 1940, the College recognized her with an Honorary Doctorate degree.

For more information on the early years, please see: “The History of Drama at Macalester” in the 1930 Macalester Year book.