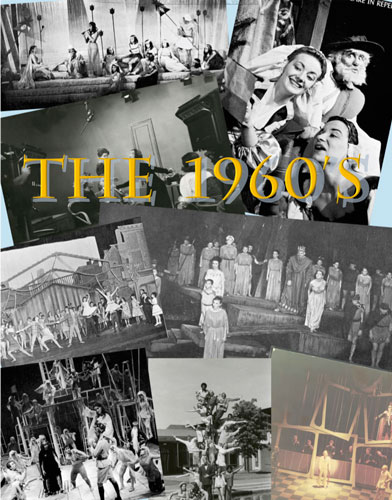 During the 1960s, President Harvey Rice oversaw major changes in the academic curriculum and new construction of academic buildings, including a Fine Arts Center. Enrollments grew to 1700 undergraduates. The academic calendar changed from traditional semesters to a 4-1-4 structure: two terms made up of four courses, with a one course Interim between the two. The President and faculty determined that Macalester would focus on its Liberal Arts curriculum, and eliminate the B.S. degree and the Nursing and Business programs.

A new Theatre building opened in 1965, and was heralded as one of the top theatres in the Twin Cities, surpassed only by the Guthrie Theatre. Its two theatres, rehearsal space, classrooms, offices, and scenic and costume shops helped fuel the expanding growth of the department. The Drama Choros increased in scope and took on national tours during the Interim term. With two flexible theatres and dedicated rehearsal space, the number of productions increased.

Professor Mary Gwen Owen retired in 1968 but continued as Director of the Drama Choros until 1970. Professor Glen Wilson was hired as the new Chair of the department. Professor Hatfield and Professor Jurik continued to grow the department's curriculum and productions throughout the decade and into the 1970s.